While this approach is straightforward, it is very prone to human mistake, what if you forgot to switch back to production server when archiving? Ever shipped an app which connects to development server to the App Store? (I have, and I am definitely not proud about it)

In this post we will use target / scheme in Xcode for separating different server environment. The technique shown in this post is only applicable for Swift and Xcode 8+.

This post assume that you already knew what is URLSession.

You can download the sample Xcode project here (two scheme / target, one for development and another for production server)

First, we will go to the Project Setting, select your current App Target, right-click and select "Duplicate".

After clicking Duplicate, you will see another target has been created, with a "copy" at the end of its name. We can use this newly created target for development server environment. Let's double click it to rename the target name to "(AppName) Development".

We will also change the Display name so the app will have a different name on the iPhone then we can differentiate the development and production app.

When we duplicate a target, Xcode will create a new scheme for us as well, the newly created scheme will use the new target we created by default.

You can change the scheme and build the app. After building both scheme, you will see two apps appear in the simulator. (eg: MultiScheme and MultiScheme Development) 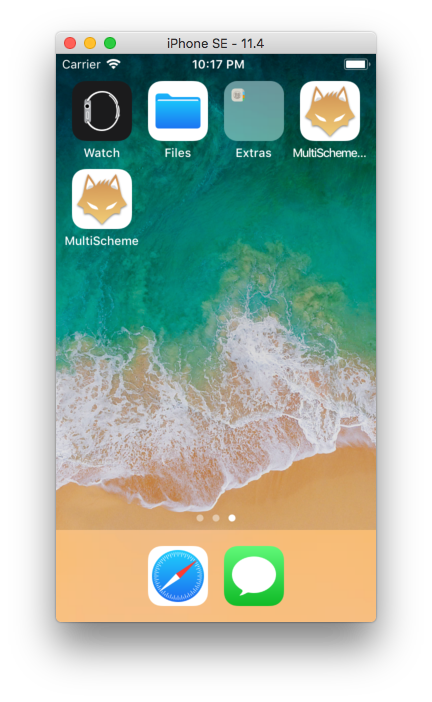 Next, we will proceed to rename the scheme so that it will share the same name as target. Similar as previous step, click the scheme beside build button and select "Manage Scheme".

Then click on the "(appName) copy" and press Enter to rename it. We will rename it to "(appName development) to match the Target name. 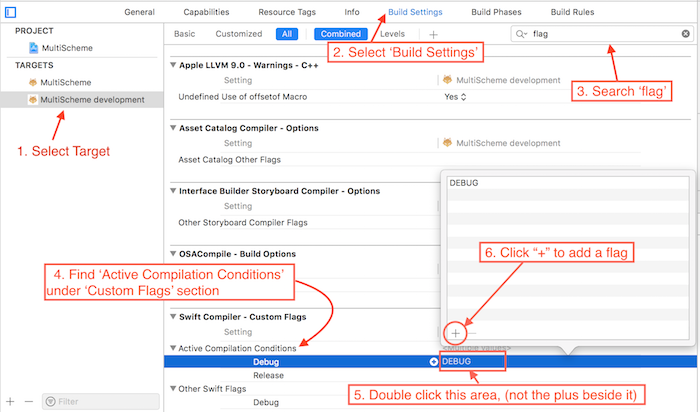 What are these build configuration used for?

In the "Manage Scheme" Window, double click into the scheme of your app, and you will see a list of actions on the left side (eg: Build, Run, Test etc).

Select Run on the left side and you will see "Debug" is selected for the "Build Configuration" by default.

Now select Archive on the left side, and you will see "Release" is selected for the "Build Configuration". This mean that when we archive the app for App Store submission, the app will use the "Release" build configuration.

If we didn't put "DEVELOPMENT" flag into the Release row earlier, it won't appear in the app if we archive this app and submit to App Store / Testflight (which might make the app use production server instead of development).

Now we gotten the flag ready, we can use it to switch between server URL when a different target is selected.
In your networking/endpoint code, add the #IF DEVELOPMENT preprocessor check like this :


Code with # (youngster calls it hashtag?) in front are known as preprocessor. What preprocessor does is that it will process the source code before it is compiled into an app. The #if ,#else and #endif preprocessor will check if a flag is defined for the app or not during preprocessing stage and modify the source code based on the condition. The flow looks like this: 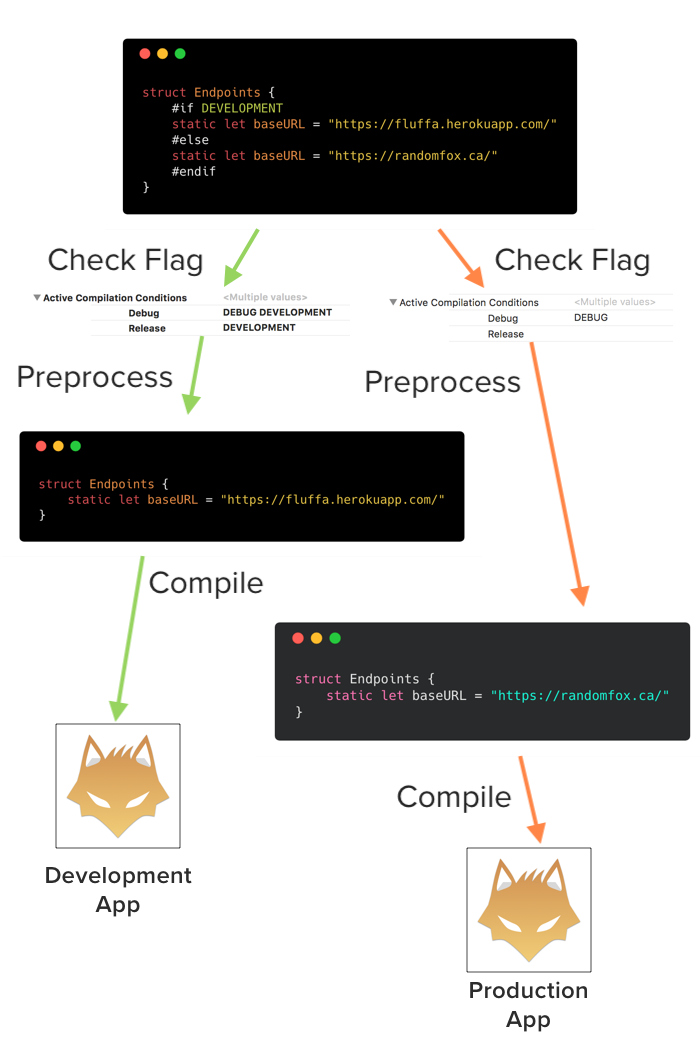 Notice that during preprocessing stage, the preprocessor will check the flag to use different line of baseURL. So now you have it! You can change the target to development during development to use the dev server, and archive the production target for App store submission.

Now we have two app target for development and production, but they share the same icon which can be confusing sometimes. Let's use another app icon for the development target.

Go to Assets.xcassets , click the "+" below and select "App Icons & Launch Images" > "New iOS App Icon". Put in your icon, then rename it.

Then go to project settings, select the development target app, go to "Build Settings", search for "app icon" and replace the value of Asset Catalog App Icon Set Name with the name you used for the App Icon earlier.

Build the development target app and you will see it uses another set of App Icon, much easier to differentiate between development and production app now :

Using multiple targets is handy for multi server situation, but it is not without caveat / downside. Here are some stuff you might need to pay attention to once you use a multi target strategy.

When you create a new file by right clicking on Xcode, notice that in the dialog box there is a "Targets" at the bottom. Remember to choose all of the targets (eg: Development and Production) so that this new file / code will work on these targets. You might get compilation error if you missed the target.

If you are using Cocoapods and want to install the same pods into multiple targets, you can modify the Podfile to this:


You can read more about this on Natasha The Robot blog.

When you create a new target, Xcode will create a new plist file and assign it to the new target automatically. If you want to make adjustments on plist file (eg: App Transport Security etc), you would need to adjust both plist.

You can change the plist in the Build Settings of the target :

Put down your pitchfork if you have it in your hand, I know some developers oppose the idea of using preprocessor saying it is bad practice, I understand the concern that the code you see might not be the exact code that will be compiled due to preprocessing and such. I have used this strategy and worked with other developers who use this strategy as well, it works well if you take care of its caveats 🤔.

You can download the sample Xcode project here (two scheme / target, one for development and another for production server)