Recently I have stumbled across a Reddit thread in r/swift, where a user is confused about why the output of his code does not match his expectation :


He was expecting the output to be like this :


But the actual output from Xcode is that all member has the same memberID! 😱🤔


If you also got surprised by the actual output, read on! The explanation for this code behaviour is at the bottom of this article.

Before going into explaining the difference between reference and value type, It is crucial to know the concept of Memory Address.

Your computer and iOS devices has a component named RAM (Random Access Memory), which is used to store working data when you are using the device. For example, when you are playing a game, there will be a loading screen to load the graphic assets and audio needed in the level into the memory (RAM), then when you are playing that level, the game will access the graphic / audio / character information from the RAM.

For your Mac, the RAM refer to the 'Memory' section. 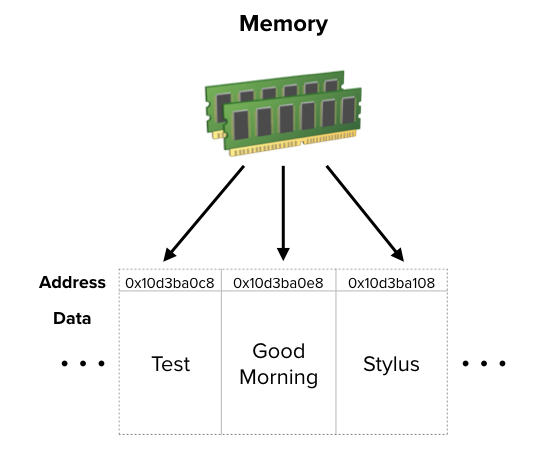 Memory address usually is a hexadecimal string (eg: 0x12345) in most computer system, when the CPU need to get a data from a certain chunk of memory, it will reference the memory address. This concept is also known as Pointer in Computer Science.

When we declare variables in Swift / Objective-C , the operating system will allocate a (few) chunk of memory (with memory address) to store them.

Some examples of value type include primitive types such as Int, Double, String ( in Swift) , tuples, enum and struct. Value type instances (ie. var myMoney: Int = 500) create a new copy of the value assigned instead of storing a reference to the value. 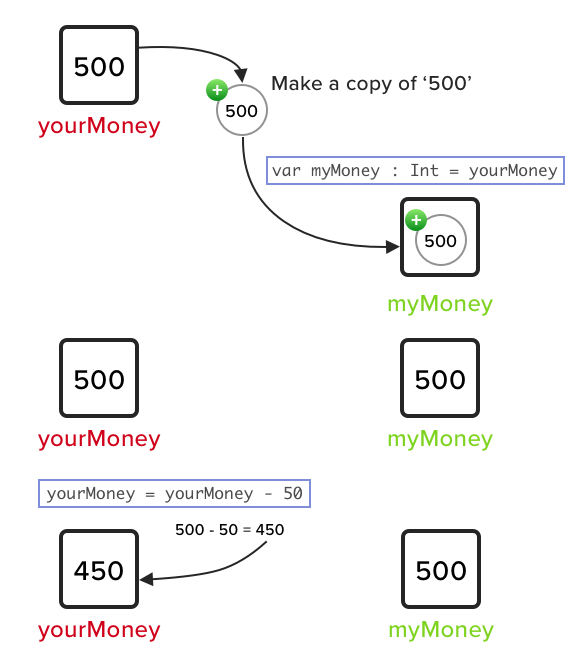 Despite the myMoney value is assigned from yourMoney value, myMoney 's value remain unchanged even though yourMoney has decreased. This is because during the assignment myMoney = yourMoney , the value '500' is copied over.

If you have experience with C, C++, or Objective-C, you may know that these languages use pointers to refer to addresses in memory. A Swift constant or variable that refers to an instance of some reference type is similar to a pointer in C, but isn’t a direct pointer to an address in memory, and doesn’t require you to write an asterisk (*) to indicate that you are creating a reference. Instead, these references are defined like any other constant or variable in Swift.

The diagram above shows how reference types work, as both "labrador" and "schnauzer" variables point to the same memory address, modifying the .name on either one of them will affect the same name data stored on the memory address.

In Swift, we can print out the memory address of reference-type variables using Unmanaged.passUnretained(variable).toOpaque() like this :


In Objective-C, we can use NSLog(@"%p", variable) to print out the memory address, the "%p" is a pointer formatter in C.


Here's the output if we execute the code above in Playground : 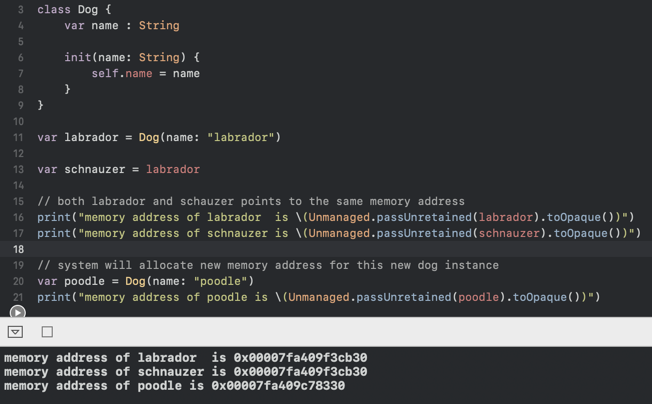 Notice that the memory address of labrador and schnauzer is exactly same! (0x00007fa409f3cb30)

Next time if you find yourself confused about how reference type work or why a class object variable output value isn't as you expected, just remember that reference type copies memory address and modify the data in that address, hence other variable that share the same memory address will be affected as well.

Explanation for the code issue

Now that we understand how reference type works, let's take a look at the code at top again :


And here's how the code works :

So when all member in members array are printed, they all print the same memberID (5) !