How to store image into CoreData

If your app need to save a lot of data which fits a certain schema (eg: a person class which have property first name, last name and age), Core Data can be a good choice for it, it can save Strings, Integer, Double, Boolean, Date etc and even Binary Data. 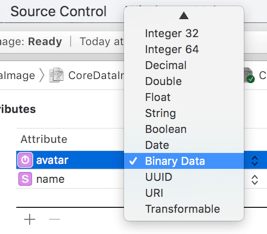 As there's no direct way to save image into the attribute, we have to convert the image into Data type. Say you have an image retrieved from Photo Album / Camera like this :


We can turn the UIImage into PNG image data like this :


Then save it into the CoreData entity like this :


This will save the image data as BLOB in the database (The default database of CoreData is .sqlite).


In Finder, press Command + Shift + G to jump to specific folder. Then paste in the path we copied earlier.

You will see there's a few files inside the folder, the one we are interested in is the .sqlite file :

I used DB Browser for SQLite Mac App to open the .sqlite file, you can use other .sqlite browser app as well.

Upon inspection, we can see that the avatar column stored a BLOB of binary data of the image:

DB Browser for SQLite has a feature that let us view the image representation of the binary data, select "Image" from the mode and we can view the image :

It's convenient to store image data directly into core data attribute but it can affect your app performance (CoreData Read / Write time) if you have a lot of rows that contain large binary data.

According to Apple's Core Data Documentation:

It is better, however, if you are able to store BLOBs as resources on the file system and to maintain links (such as URLs or paths) to those resources. You can then load a BLOB as and when necessary.

What this checkbox does is as described below from Apple's documentation:

Small data values like image thumbnails may be efficiently stored in a database, but large photos or other media are best handled directly by the file system. You can now specify that the value of a managed object attribute may be stored as an external record—see setAllowsExternalBinaryDataStorage:. When enabled, Core Data heuristically decides on a per-value basis if it should save the data directly in the database or store a URI to a separate file which it manages for you. You cannot query based on the contents of a binary data property if you use this option.

After checking the box, large image file will be stored separately, and the column stores binary data that reference the path to the image.

The column stores the reference file name to the image (the red square) :

In the Application Support folder, press Command + Shift + . (Period) to reveal hidden file / folder. We will see that theres a hidden .CoreDataImage_SUPPORT folder. Open it and we will find another folder named '_EXTERNAL_DATA', the image is stored inside this folder. 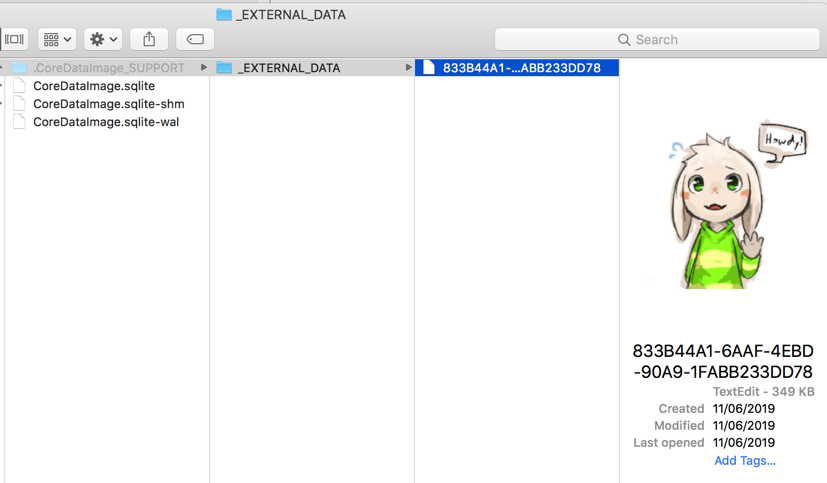